Top Tips to Giving a Gift in China

Your Pocket Guide to Gift Giving

If you have been to China and have presented a gift to your Chinese hosts or work colleagues, then I’m sure you are aware of the ritual of gift giving in the country. Gifts, no matter how large or small, are expected to be reciprocated as the giving and receiving of them is an integral part of Chinese relationships.

If you are invited to a dinner, then it is usually expected for you to bring some sort of gift to the dinner, especially to those with whom you are trying to establish a relationship with, be it private or professional.

Alternatively, if you are trying to curry favour with an official then it is worth buying a gift for their spouse too! Currying a favour through gifts can be expensive! But don’t panic if you do not know what to buy, our tips will help you give the perfect gift!

In China there are plenty of taboo gifts. Though you may think it is an appropriate present, there are some items that should be avoided to give as gifts. Such traditionally taboo gifts are mostly associated with inauspicious homonyms (words that sound the same in Chinese).

For example, clocks are considered a bad present. This is because the Chinese phrase for ‘give a clock: 送钟(sòngzhōng)’ sounds the same as ‘attend a funeral: 送终(sòngzhōng)’

Fans (扇: shàn) and umbrellas (伞: sǎn) are also not good presents. These items are considered unlucky because they sound similar to the Chinese word散 (sàn) which means separation, which is not the best sentiment to express when giving a gift.

#Extra Tip: When giving a gift, never give four of something. The number four (四: sì) is considered to be very unlucky, as it sounds very similar to ‘death: 死(sǐ)’ in Chinese.

#Tip 2: Give a gift that is locally produced from your hometown

The Chinese particularly like ‘local speciality produce’. If you give something from your hometown such as biscuits or preserved food this will for sure go down well.

#Extra Tip: Fruit, particularly fresh, is always good to give and is always welcome. Especially if you are visiting someone’s home, anything that can be used around the house will make for a thoughtful gift.

#Tip 3: When presenting a gift remember to say ‘不成敬意 (bùchéngjìngyì)’

If you are presented a gift it is customary to belittle it by saying ‘不成敬意 (bùchéngjìngyì)’ which is a polite way to express  a small  token of respect.

Likewise, when receiving a gift you should praise the giver by saying ‘此等厚礼 (cǐděnghòulǐ)’ which is also a polite expression that means ‘what a generous gift!’.

#Extra tip: If your gift is refused out of courtesy it is best not to be pushy and acknowledge they don’t want your gift. Also, it is a tradition in China not to open the gift once they are received. This saves them ‘face’ if they do not like the gift but if you say ‘go ahead and open it’ ‘打开看一下(dǎkāikànyīxià)’ then the receiver will do so. 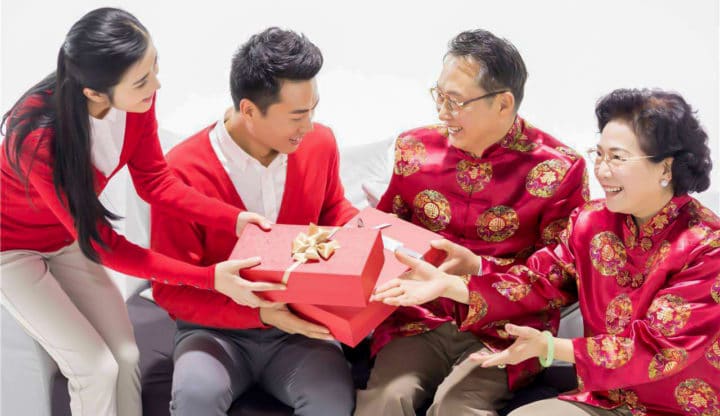 We hope these tips on what not to do and do have been useful for you. The rituals of gift giving in China are a great insight into Chinese culture in the same way that attending a dinner banquet allows you to further understand their rules of courtesy.

Remember don’t panic if by accident you give the ‘wrong’ gift, just by presenting a gift will show your token of respect.

Please leave a comment below if you have any insights into gift giving in China, we would love to hear more about your experiences.

Get the free guide: